As the midsummer sun enters Cancer, the cardinal water signed ruled by the moon, thoughts rightfully turn to the divine feminine aspect of the One Father-Mother God.  Her presence resides within everyone irrespective of gender for she is our soul aspect, the counterpart to our spirit essence.  The Sun and Leo represent the Divine Father and Spirit aspect, which correspond with the First of the Seven Rays, that of Will and Power.  His consort is the Moon which represents Divine Mother and Soul, corresponding to the Second Ray of Love-Wisdom.  She is also the goddess principle who has three faces or phases: the Maiden, Mother and Wise Woman (disparagingly called ‘crone’ in past times).  Like the changing faces of the moon, the force of the living god-in-matter is subject to constant flux, change and growth over repeated life cycles through which we evolve to eventually become fully divinized as Illumined Ones.  This bright future is promised to everyone regardless of gender, race, creed, religion, social or family background, or historical time in which they live.

At the time of the new, or dark, moon the sun and moon come together in conjugal conjunction, the sun inseminates her with his seed and the maiden becomes impregnated; in the next phase she gives birth to their child and changes into mother, then as she ages and becomes physically barren, the understanding she gained from past experiences turns into wisdom, and the cycle is fulfilled as she becomes a wise woman.   At some point in their evolution over successive lifetimes, both men and women transform their lower self, the lower ego, and become pure or virgin souls, which is akin to entering the Maiden phase.  As in fairy tales, the human soul (princess) eventually meets and falls deeply in love with the one true love (prince charming) she’s always been searching for but never yet quite managed to find: the Spirit essence within.  In their true act of  love-making the inner spiritual force impregnates the purified soul, she conceives and later gives birth to their Divine Child,  becoming Mother to their Christ Child.  Later, when the soul gains full understanding of this truth then that person becomes fully illumined with Wisdom. The Divine Child born to the Mother within us refers to the new body we ourselves birth, our Body of Light.  In this our second birth we are re-born with a new immortal and indestructible solar body made up of finer light substance than its physical counterpart.

Every human being has the potential to complete this process over many lifetimes, which is the high purpose of human existence.  In the White Eagle tradition, this is also the deeper subject and goal of the sacred science of astrology, whose true role is to assist in this process.

Speaking of the Seven Rays, the first, second and third are the major ones, forming a holy trinity of Power, Love-Wisdom and Intelligence.  Three in One.  Astrologically, the first ray of Power corresponds with the ‘masculine’ Sun, Mars with its sign Aries, and other cardinal signs, and when these are prominent in a horoscope there is likely to be some kind of first ray emphasis in the life, character and destiny.  Then there is a general thrust towards direct leadership by telling people what to do and even imposing force, sometimes with the conviction that the ‘end justifies the means’.   First ray types lead by action and compulsion, being symbolic of God the Father.  In contrast, the second ray is also a ray of leadership but in this case God acts as Divine Mother and leads by example, still taking responsibility but in a gentle way by setting good examples for others to follow, and by wisely bringing people together using the unifying force of love.  Indicators in a horoscope that a person is operating principally on the second ray are seen from the strength and dominance of both Sun or Moon, Leo and Cancer, as well as Taurus and the other fixed signs.

In this the Queen’s Platinum Jubilee year comes a realisation that future generations will look back on us as Elizabethans.  Irrespective of whether or not we support the institution of monarchy, there is widespread support for the Queen herself together with deep admiration and respect for her faithful and unstinting years of service.  This is written all over her horoscope, shown not least by a very strong Saturn which enthrones her midheaven as a powerful symbol of her dedication to her work of service to the country over seven decades.  It clearly reflects her strength, determination and perseverance to stoically fulfil the promise of her Taurus Sun whose highest soul purpose is Service through Love.   Saturn is extremely strong in her chart being the ruler of her Capricorn ascendant, which it harmoniously aspects, and the moon’s south node which is on the ascendant, making her all too aware of where she is coming from and the future direction in which she is destined to travel:  she is to work hard for the sake of others and surrender her own will to that end. 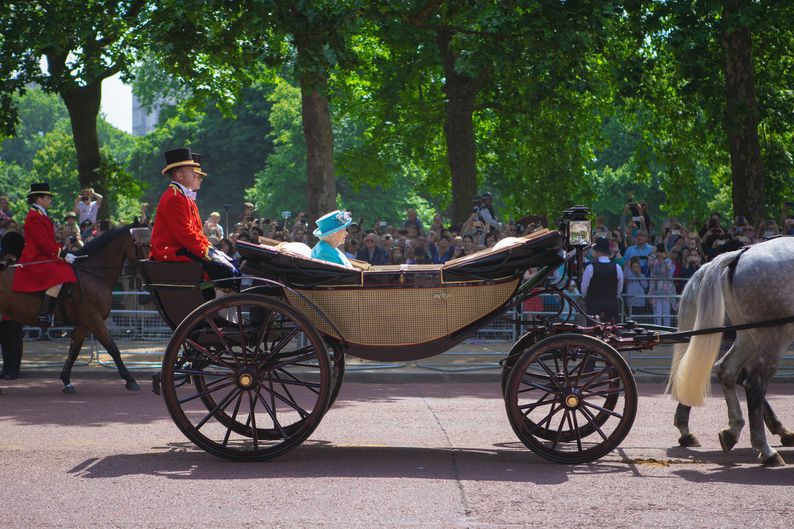 Like any public figure, the Queen’s popularity has been subject to ups and downs over the year but the recent Jubilee celebrations have clearly demonstrated that not only do the People respect her as a steadfast, loyal servant who has worked tirelessly in their service for longer than any other reigning monarch, but she has also steadily grown into a matriarchal figure.  Dare one even say a type of Divine Mother?  Whilst the Queen is not so overtly cuddly-maternal (astrologically) at the personality level as Princess Diana and her son Prince William, nevertheless the Queen’s birth chart does show a strong second ray influence through the dominance of fixed signs: her Sun is in the first degree of Taurus and her Moon in Leo.  Through dogged perseverance and by surrendering her personal life and inclinations to her ‘job’, she has managed to emerge as a sort of superwoman who combines work with family and leads by example.  Consequently, she is held in deep, if not awesome, respect around the world and over time she has come to represent soft power, which is the very definition of the second ray!  This respect comes from the changes she has helped to bring quietly about, adeptly steering Britain away from its imperial past towards a new definition of Commonwealth.

Despite the legal restrictions to her role, at the time of her coronation in 1952 she promised to work for unity and peace and said “it must be my constant prayer that true brotherhood and partnership may be achieved throughout the Commonwealth between peoples of many different races and cultures and religious faiths”.  Arguably, she had done more single-handedly than many of her governments to fulfil this promise such that the Commonwealth has developed into a friendly, voluntary association of 54 independent and equal countries comprising around one-third of the world’s population.  For someone who many see as a powerless figurehead this is quite some achievement, and one that is very much in accord with Aquarian values.  The recent Jubilee celebrations certainly displayed the great pride she has and the value she attaches to that and also to the current diversity of our country, that diversity being visibly upheld for the world to see as defining its very strength, heartbeat and promise for a brighter Aquarian future, at very least setting this as an ideal and hopefully a real example that others might also follow.

It is interesting to compare her horoscope with that of her namesake, Queen Elizabeth I, the so-called Virgin Queen.  Elizabeth I was sun-sign Virgo, and she was fashioned into that Virgin or Maiden archetype by her political advisers for state reasons at that time in history in order to avoid the risks associated with marriage to self-serving suitors who sought power for themselves.  Whilst there is a growing body of evidence to suggest that she was actually secretly married, and most likely bore two children, the first Queen Elizabeth was very unlikely to have been what we now call ‘a virgin’.  Yet, for political and for deeper esoteric reasons, she was turned into a living embodiment of the Maiden, or Virgin aspect of the triple goddess, and she acted out this drama on the world stage for all to witness.

Comparison of the two Elizabeths’ horoscopes makes interesting reading for they indicate some continuity of purpose from the first to the next, hinting at the possibility that our present Queen had work to pick up from her predecessor and carry forward in the future that is ours.  Is it too fanciful to wonder whether Queen Elizabethan I embodied the Maiden aspect of the divine feminine, which is also the Soul aspect of the nation and all its People, and that Elizabeth II has been working - consciously or not - to embody the Mother aspect?  Might she have received higher guidance to this end?  Might there be a future Elizabethan age when the Wise Woman might be embodied and that stage acted out?  Food for thought.

White Eagle was very clear that Britain would in future become less wealthy on the material level than it had previously been, but that it has a leading role to play spiritually.  Like a rose in bloom, its fragrance would become a healing balm and inspiration for all people around the world.  It is perhaps easier for a female monarch to help in this process of transformation, especially if she is supported by a horoscope (arising from past life work rendered and qualities honed) with a strong second ray influence.  It has perhaps been easier for a woman to play the part of the triple goddess in her stages of Virgin, Mother and Wise Woman, which may be why our longest-serving and arguably our best monarchs have been women.  As we all evolve and things develop, though, we should not rule out the possibility that such a dramatic enactment might be possible by person of different gender provided they had the right inner qualities.

British history reports a catalogue of feuds between king and nobles, between sovereign and parliament.  Over the centuries there has been a slow transfer of power from king to state, such that the first ray of Power now rests in the hands of an elected government under the leadership of its Prime Minister.  Sadly, in recent times we rarely see evidence of leadership by example, more often it is a case of ‘do as I say, not as I do’.  In the second Elizabethan Age it is as though our Queen has taken upon herself the mantle of the second ray leadership-by-example by embodying the principle of Love-Wisdom for all.  Ideally, we will have a perfect balance, or marriage, between a first ray parliament which embodies the highest potential of this ray by working tirelessly for right, truth and justice ‘married’ to a second-ray sovereign who leads by example with loving wisdom, regulating and modifying any harsh excesses of zeal from ‘her husband’ and inspiring ‘him’ with love and the urge to care for, nurture and develop all equally.  In this case, our future kings will have to carry on the task of transforming the monarchy into a fully Second Ray institution of Love-Wisdom, for what other purpose can it serve when it is the People’s will that Power should be commuted to an elected government? 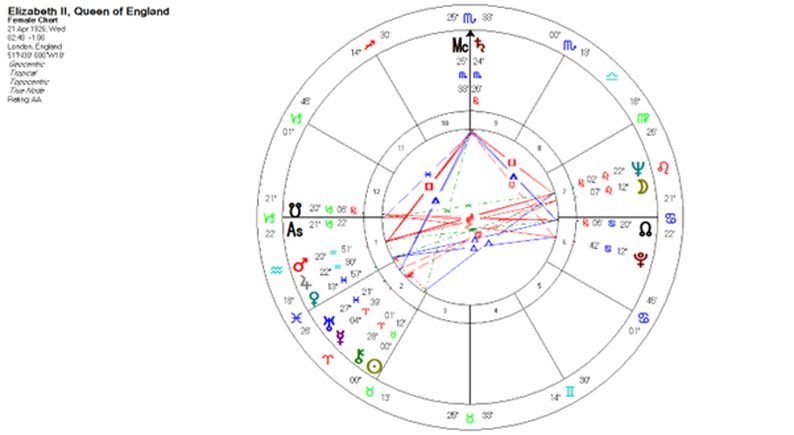